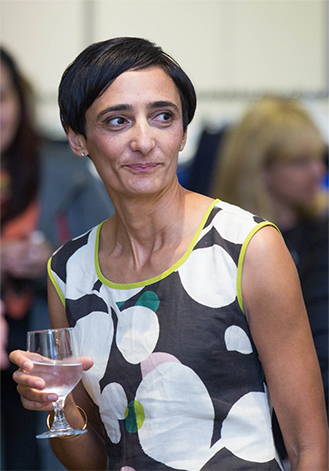 Anna launched her label in August 2002 after returning from Italy where she was the fashion co-ordinator for the Max Mara Weekend label. Her first retail shop in Melbourne’s Little Collins Street opened its doors in 2004. There are now ten stores around the country.

Anna’s former boss, Luigi Maramotti, Chairman of the Max Mara empire described her as a rare person whose attitude to life, friendship, creativity was unique and inspiring.

Anna grew up in the Perth suburb of Dalkeith, the youngest of four girls. Her father C.V. Thomas (Tom) came from Kerala in India in the 1950’s to study medicine. He became a prominent plastic and reconstructive surgeon, later opening his own medical practice. Anna’s mother Rosemary, former nurse, is from Hobart. Her sisters – Ranjeny, Helen and Cathy are eminent in their chosen careers in science and medicine. Her father remarked that Anna was the only one to follow in his footsteps, that is, to “cut and sew”.

The Thomas home was a vibrant, artistic household filled with a spirit of creation. As a child, Anna sewed clothes for her dolls. She was also a talented artist. She developed a passion for the classic age of Hollywood and admired the style of actresses like Audrey Hepburn, dressed so eloquently by Paris couturier Hubert de Givenchy. Another great love was alternative music. As a teenager she attended many gigs (Lloyd Cole, OMD, Simple Minds) and produced ‘fanzines’, which she wrote and illustrated herself.

On a Year 10 study tour to France in 1986, Anna announced to her classmates that she would open a boutique on the Champs-Élysées one day. She became besotted with the elegance and style of tailored European fashion. Back at home, she created clothes or hats every weekend under her label Annamma (her birth-name) for herself, friends and family. She was a dynamo, producing hand written labels and price-tags, advertising material and the packaging for her garments and accessories.

Initially studying graphic design at Curtin University, Anna got her wish to study fashion, enrolling in a two-year advanced certificate of clothing design at Bentley TAFE in WA. Towards the end of her final year Anna entered the 1991 Young Designer Awards which was sponsored by the Australian Wool Corporation. She told the media her design – an intricate, elegant ivory and lemon evening dress with detailed hand embroidery – was inspired by Gustav Klimt’s art nouveau eroticism. Anna then aged 21 - won the top spot in the state final and went on to win the national title.

The Young Designer Awards created opportunity for Anna, who, even before making her entrance into the fashion industry, was described as meticulous, well-organised and diligent. She wrote to Country Road’s founder Steve Bennett who gave her a junior position, despite being at the tail-end of ‘the recession we had to have’. Anna, who turned up to work in Chanel-inspired suits she created soon rose to senior designer at Country Road, where she designed for both the domestic and the U.S. stores.

Travelling to the twice-yearly Premiere Vision fabric exhibitions in 1997, Anna by chance met Luigi Maramotti head of Italian fashion house Max Mara. She was invited for an interview and immediately offered a position. Relocating from Melbourne to the provincial town of Reggio Emilia south of Milan, Anna continued her career. This was also where she later became reacquainted with former Country Road colleague David Barrington. Anna and David became the ‘Australian couple’ at Reggio Emilia.

Deciding whether to continue her career in New York or Italy, the events of 9/11 made them resolve to keep their families closer. She and David returned to Melbourne in early 2002 to start a family and a new business. In her determined way, she sketched out a proposal for the Anna Thomas brand with a focus on quality womenswear that brought a touch of Europe to Australia. Her business plan stressed the importance of excellent fabric and creating an overall look, without being overtly trendy. Later, print and vibrant colour became a signature of Anna’s look. What set the Anna Thomas label apart from other Australian designers was tailoring, fit and quality.

She began putting her designs in front of fashion entrepreneurs including Belinda Seper of The Corner Store who focused on imported labels and a few quality Australian and New Zealand designers. Anna, after trial and error, secured her first significant order from Belinda. It was for black suiting.

Today, walking into an Anna Thomas boutique is a vastly different experience. Women can still find suiting, but each range is a picnic for the professional woman who desires colour, print and tailoring they can wear every day, rain or shine. Each twice-yearly collection of six to seven distinct ‘stories’ was all Anna’s own design work, infused with experiences from her beloved music, travels, books she read, art she was inspired by and films she adored.

Anna Thomas achieved her childhood dream of doing what she loved, in the process becoming a renowned fashion designer who made her mark on the Australian fashion industry. She was always humble and a great listener. Preferring privacy to publicity, she is adored by thousands of women who wear her clothing, including many in the public eye - state premiers, politicians, personalities and CEOs. Her legacy will endure and the brand will continue.

Most important to her was her family. Her husband David Barrington is the Managing Director of Anna Thomas Pty. Her darling children are Lilla (14) Angus (11) and Oscar (8). Anna recently wrote:

The designer, who was forty-nine, was diagnosed with a rare illness in March 2017. She wanted her life to continue as normal and kept her health a private affair until the end.